I designed the business cards which I intend to distribute at the honours degree show.

The AOs were analysed to better understand their structure and the similarities between them. 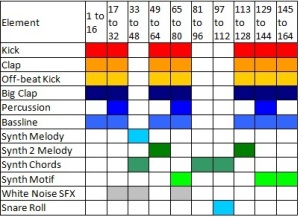 Although these tracks do not employ the exact same developmental structure, when the structures of all the AOs are closely examined, many similarities can be drawn.

A table of structural development was formulated by analysing the structures of the AOs and identifying the changes of the layers in bars.

This table was used to produce the structural template of the step-by-step guide (see below).

The similarities between the drum patterns are obvious, using the same basic pattern described by Eric E in the  Pump Up The Volume Documentary. They all incorporate the same basic 4/4 kick drum, 2/4 Snare / Clap and off-beat high-hat with some small variations. All of the AOs apart from I’m Not Alone had two drum patterns, the first basic pattern and the second pattern which included a new layer (instrument). This new layer in the second drum pattern creates a sense of progression. All AOs pertained to these rules;

Kick must play on the beat, clap on the 2ndand fourth beat and the high-hat on the off-beats

Kick and clap are always present, but the off-beat instrument can have variation.

This was implemented into the step-by-step guide by giving the user a selection of drum patterns to choose from, thus giving them some creative control. It was thought that the user’s ability to choose from a selection of patterns act as the creative input necessary for producing original music, however still restricting it to the confines of the genre.
Rhythm:Melody / Chords

Initially the rhythmic patterns of the melodic patterns were analysed by studying the correlation between the note playing on the beat and off the beat. This was the results of the analysis;

These data show that the;

This AO is significantly shorter than the other AOs lasting only 2:37 minutes, almost half the time of the other AOs. However it still employs a similar structural template as the other AOs, with a development of instrumental layers leading to a 16 bar chorus break.

This table identifies that Bodyrox have had most success when working in a minor key and their most popular track “What Planet You On” was written in D Minor.

Similar to the other AOs, this track implements the generic 4/4 house style beat, however unlike the other AOs the high hat of drum pattern one played 16th notes. The second hit of every note had a slightly softer velocity creating a sense of movement, this idea of motion was bolstered when it was panned from left to right (see page 7 for panorama).

A second high-hat playing the generic off-beat was added between bars 17 to 24, 33 to 48, and 68 to 81. This high-hat created a sense of development, building tension – it was used before the chorus breaks and in the final bar.

This AO, like Put Your Hands Up For Detroit, does not have a separate bassline and melodic pattern. Thus the bassline is a combination of the two, providing the low end bass and the main hook melodic hook.

This synthesizer was produced using four oscillators pitched slightly apart; one square and three Sawtooth oscillators. The synth’s frequency and time settings were automated to allow them to change over time. This allowed the producer more control of the tension through fluctuation of the frequency and decay time of the synth patch throughout the track.

All the oscillators have the same ADSR; instant attack, medium decay and short release.

A reverb unit was inserted on the synth. The Dry / Wet was automated to allow the reverb to be used as an effect and this played a crucial part in the development of the sound during moments of tension. 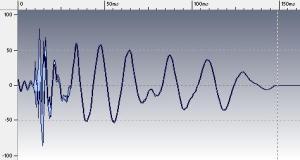 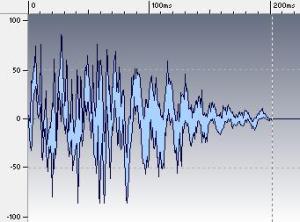 The pan position of the instrumentation follows the guidelines which Owsinski recommended in “The Mixing Engineers Handbook” (2006i) (see blog for author’s research into panning) and the same basic positions as the other AOs. The most interesting panoramic feature of this track was the pan position of the high-hats which swings from left to right. This subtle effect helped to make the track a little more interesting by giving it a little more depth.

The AO were compared to find the mean settings for making an EDM record. The [see full comparisons on blog]. The outcome of the analysis was used to produce the step-by-step guide, however the challenging aspect of making the guide was to take the information that had been collected and form it into a set of instructions which allowed capacity for creative input (whilst remaining within the confines of the guide).

This AO develops using a similar structural template as Happy Violence, opening with the same basic drum pattern and developing in bars of 8 and 16. The chords which provide the main melody for the track start at bar 9 (section2) and lead to the first short chorus break, occurring between bars 17 to 25 (section 3). Although this track has a similar structural syntax as Happy Violence, it differs from Ghosts N Stuff in that it has four main sections; 1 to 3; 4 to 8; 9 to 12 and 13 to 22, whereas Happy Violence has just three main sections. It also has only two chorus breaks one which last for 8 bars and the second for 17 bars. Ghosts N Stuff has three chorus breaks which last for 8 bars each, demonstrating that although these AO all share similarities by working in bars of 8, there is not a global structural template which all producers adhere to.

Although the tempo appears to  fluctuate between 126 and 140 bpm, two of these are remixes by different producers and the actual mixes produced by Deadmau5 are between 127 and 128 bpm. It is also apparent that Deadmau5’s preference is to work in Minor, with the exception of “Wheres My Keys”.

Like the other AOs, this track implements the same generic 4/4 house style beat.

This drum pattern implemented on the last sixteen bars of the track is essentially a breakdown of the first drum pattern; a 4/4 kick drum beat with a clap on the second and fourth. However the high-hat  been removed indicating the track is breaking down as it approaches the end of the record.

This drum pattern implemented on the last sixteen bars of the track is essentially a breakdown of the first drum pattern; a 4/4 kick drum beat with a clap on the second and fourth. However the high-hat  been removed indicating the track is breaking down as it approaches the end of the record.

The chords are long sustained notes. The first two bars of each phrase play on the beat followed by two sustained notes which start on the offbeat. These offbeat notes act in a similar way to Fedde Le Grand’s Put Your Hands Up For Detroit bassline. It creates a snappy rhythm and the variation may also partly be responsible for maintaining the listener’s interest.

The bassline has the same basic style of syntax as Dada Life’s Happy Violence and contains the same number of notes. Although deceptively simple looking, the positioning of the notes has a significant impact on the rhythmic groove of the track. Moving the position of the notes to be slightly earlier or later transforms the rhythm. Dada Life discussed this bassline phenomenon in an interview with Future Magazine issue (Dada Life 2011), unfortunately they did not offer any magic answer, but they did admit to spending hours positioning the notes of their basslines to ensure they sounded exactly as they intended them to sound. By comparing Ghosts N Stuff to the rhythm of Happy Violence, the similarities are clear;

Similar to the plucked instruments implemented in the other AOs, this synth only plays three notes. Through experimentation with the plucked synthesizer, it transpired that convoluted and excessive counter melodies distracted attention from the main lead line thus the overall rhythmic feel of the track was lost. The plucked synthesizer acts as a decorative or percussive element rather than a melodic sequence. 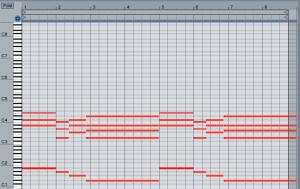 This synthesizer is produced using only one Sawtooth oscillator. It has an instant attack, long sustain and short release. No effects were applied to this synthesizer.

This synthesizer comprised of only one Sawtooth oscillator. Similar to the plucked synthesizer analysed in the other AO, the plucked sound was produced by setting the ADSR to a fast attack, medium sustain and short release.

A saturator was inserted to sharpen the high-end.

A compressor was used to glue the sound together and maintain a consistent loudness.

An EQ was inserted to low-cut the low end frequencies and bring clarity to the high-end.

Through the study of these four AOs, clear similarities in the production methods can be drawn which indicates producers do use a set of production guidelines, through structure, drum patterns and choice of instrumentation.